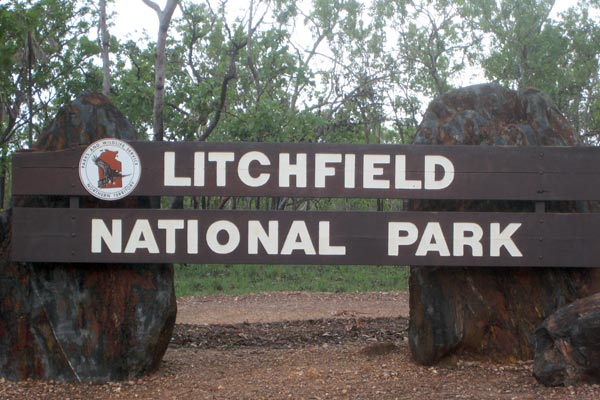 After leaving Kakadu, we headed east towards Darwin. On the way, we spent a day and a half in Litchfield National Park, lured by the guidebook’s promise of water in both stream and waterfall form.

Some light rain fell in the late afternoon, raising our hopes that we’d see more activity on the roads at night than we had at Kakadu. And we were not disappointed. In addition to many Cane Toads and a few species we had seen before, we saw a couple of frog species we hadn’t previously seen on this trip. This one is Cyclorana australis (Giant Frog). It is a large-ish frog, but not one that I would have called giant. 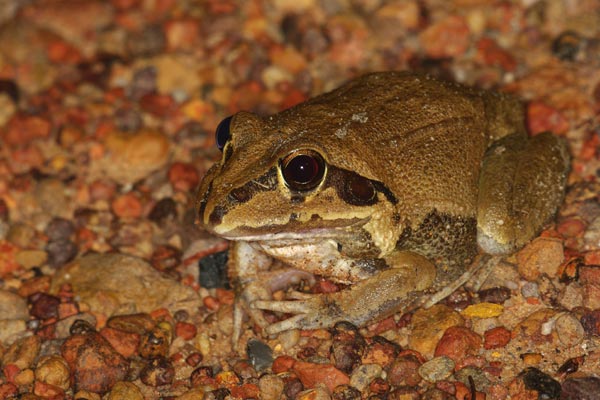 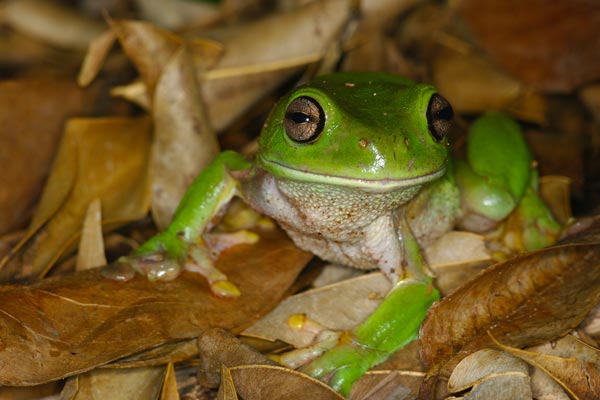 After seeing so many non-native Hemidactylus frenatus and so few native geckos, I was excited to spot a gecko on the road. When I ran back to check it out, it looked so nondescript that I assumed that it was yet another H. frenatus, and took a quick photo and left. When looking through my photos, I realized that it was indeed a native species. I believe this is Gehyra australis (Northern Dtella). 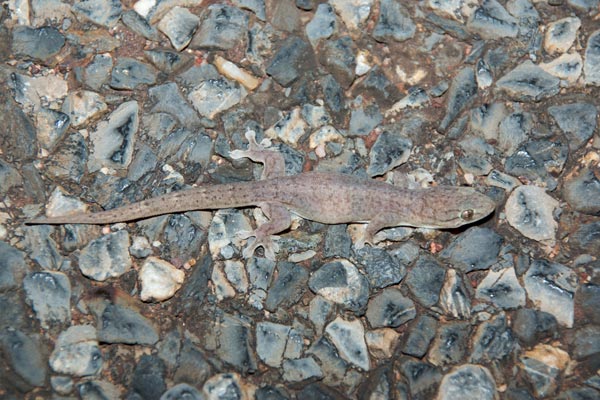 A fine lizard on the road at night was this Lialis burtonis (Burton’s Snake-lizard). This is the lizard with the biggest range in Australia, at least until it is eventually split into numerous species. These legless lizards have hinged jaws and various other snake-like characteristics. 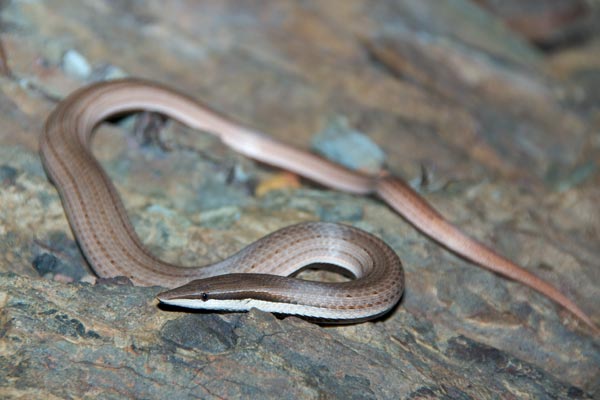 Litchfield’s roads offered up some snakes as well. This is Boiga irregularis (Brown Tree Snake), well-known as the snake that ate all of Guam’s native birds. The ones in this part of Australia have a particularly dramatic pattern that has earned them the colloquial name “Night Tigers”. They are rear-fanged colubrids that are considered mildly venomous but not dangerous to humans. This one was pretty angry, and I didn’t want to verify its toxicity levels. 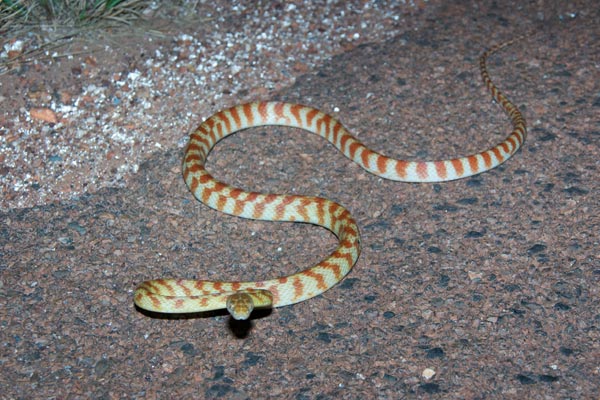 This Antaresia childreni (Children’s Python) was at the other extreme of snake agreeability. This species was named not for its small size and cuddly demeanor, but in honor of someone named John George Children. I want to make some joke about Paul Ringo Children, but I will refrain. 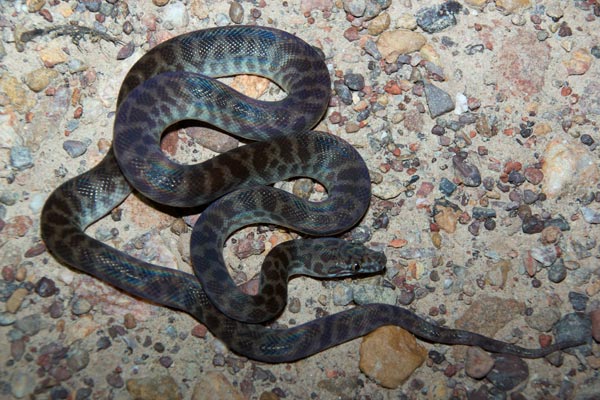 The same road also presented us with an Acanthophis praelongus, the dramatically-named Northern Death Adder. These snakes look very much like pit vipers, but Australia has no pit vipers; they are elapids like most of Australia’s venomous snakes. When disturbed, they flatten their bodies and snap into a sort of semi-coiled position. This is a very quick action. One instant the snake is stretched out and inching along lazily, the next instant it is flat, bent, and motionless. 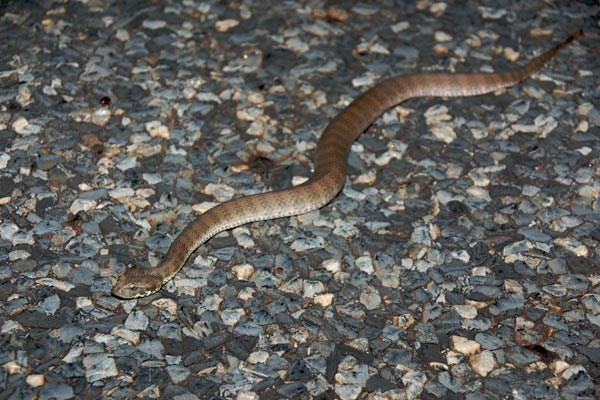 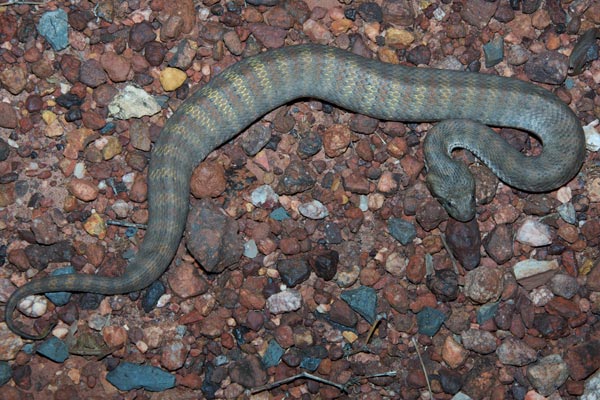 Here’s another one we saw the next evening, getting even flatter and more bent. 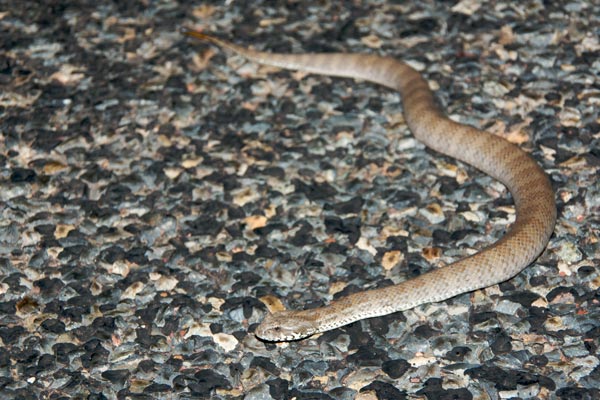 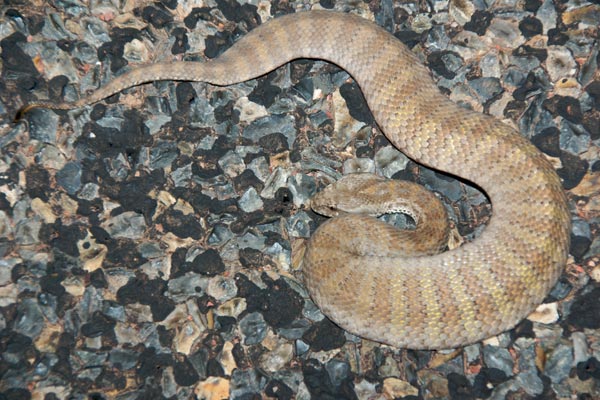 The final snake species we saw on the Litchfield road was Dendrelaphis punctulata. There were two individuals right next to each other at the side of the road, one alive and one dead. I suspect some amorous activity had been tragically interrupted. When it saw me, the live one decided to escape at top speed, and its top speed was extremely high. I was running alongside it for awhile just to see how fast it would go. I could keep up, but only barely. It ended up in a tree along the side of the road. It was not cooperative for my camera even then, but it did demonstrate that it had excellent climbing skills in addition to its excellent racing skills. 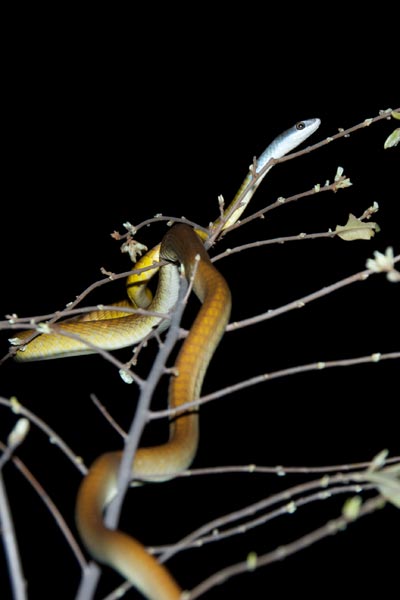 We finally got a good look at Dendrolaphis punctulata a couple of days later at Territory Wildlife Park, a very good zoo operated by the Northern Territory Parks and Wildlife Commission. This snake was a wild animal on the grounds, not a captive. It was engaged in some sort of drama with a small bird that was repeatedly swooping down near the snake’s head. I suspect that the snake was getting too close for comfort to the bird’s nest. 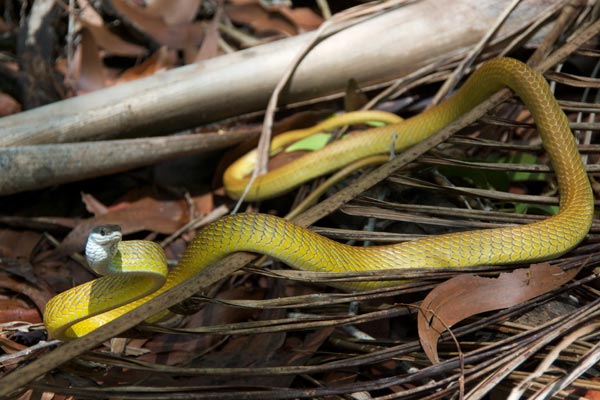 But enough of green tree snakes that are not green, and back to Litchfield Park. One of the spots we visited was Tabletop Swamp. Lonely Planet’s “Watching Wildlife: Australia” had promised us dingos at this spot, but were there dingos? No, there were not. Still, as long as we were there, I chased down some skinks and tiny frogs. Here I am trying to wrangle a tiny frog so it will sit still long enough for a photograph. 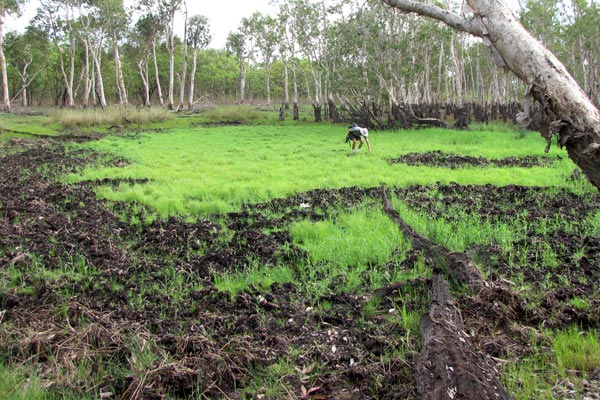 And here are a couple of the tiny frogs. I believe these are both Crinia remota (Remote Froglet). Four or five of these guys could fit on a dime. 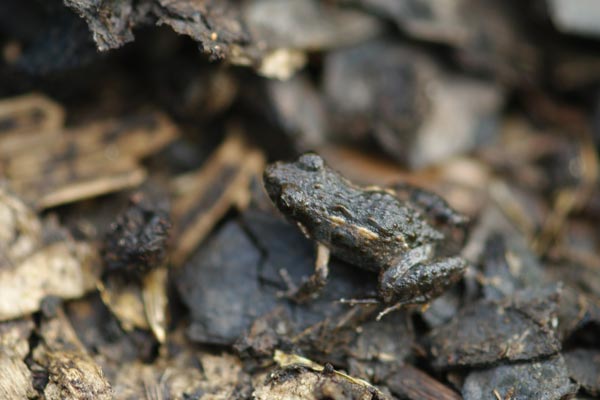 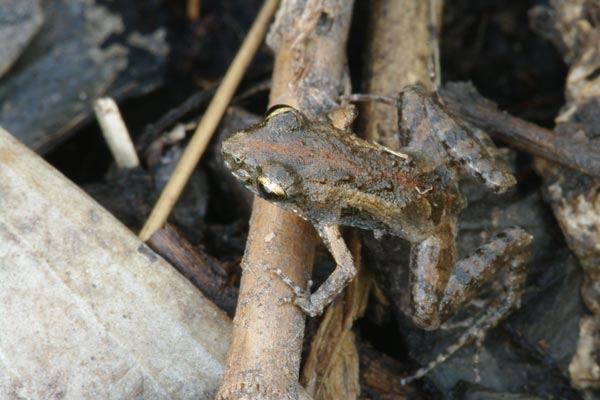 The green-butted ants were busy in this swamp also. They were everywhere. 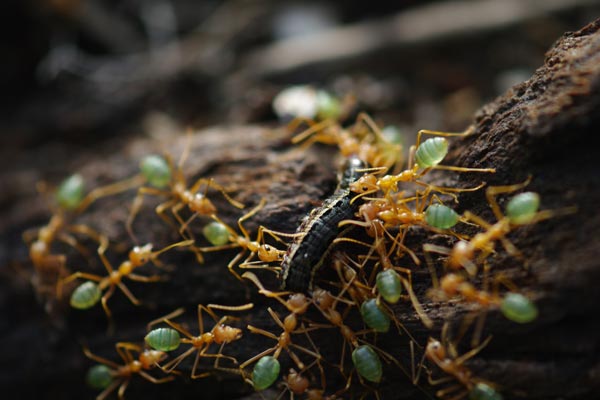 Did I mention that we never got tired of seeing parrots? This one is a Calyptorhynchus banksii macrorhynchus (Red-tailed Black Cockatoo). You can just see a glimpse of its bright red tail feather markings here. 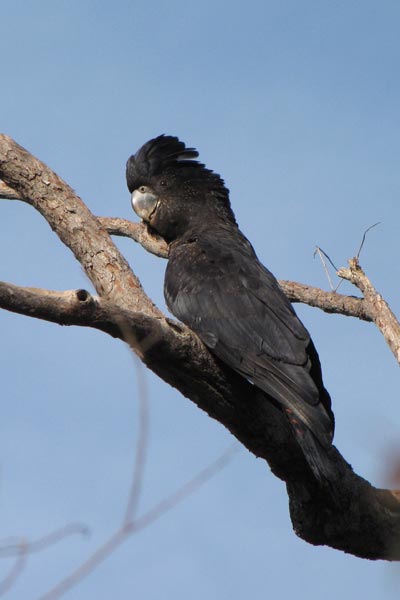 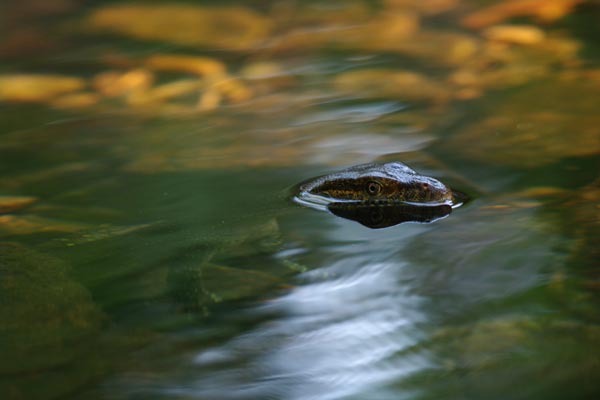 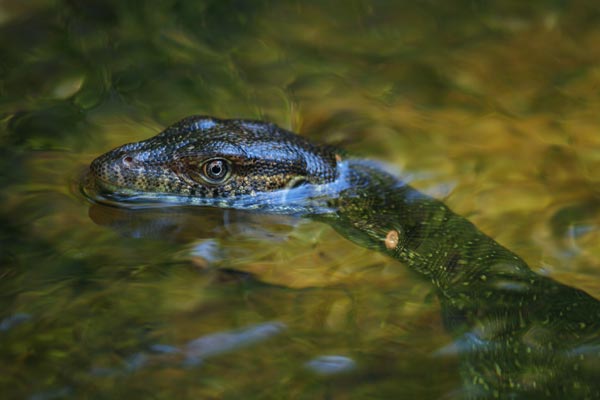 The next morning we came across another, larger, Varanus mertensi out for an early-morning bask at the side of some more flowing water. The first photo is approximately the view we had when I first spotted the monitor. (Can you see it?) It rested for about ten minutes after we first noticed it, then slowly clambered over the rocks and eased itself into the water for the morning hunt. 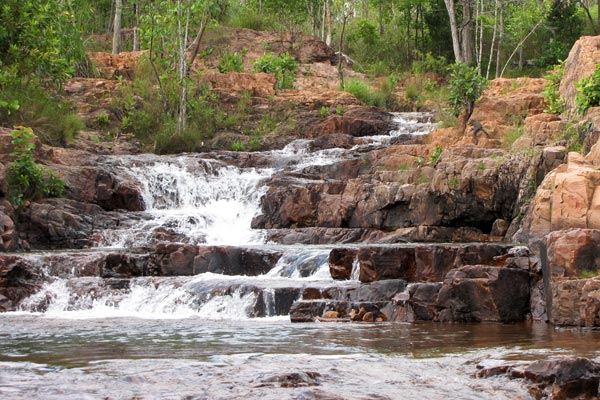 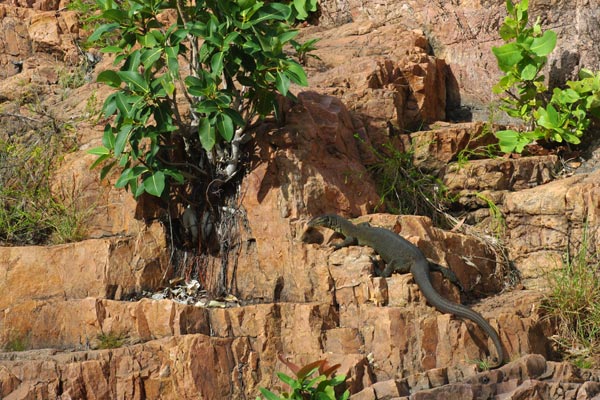 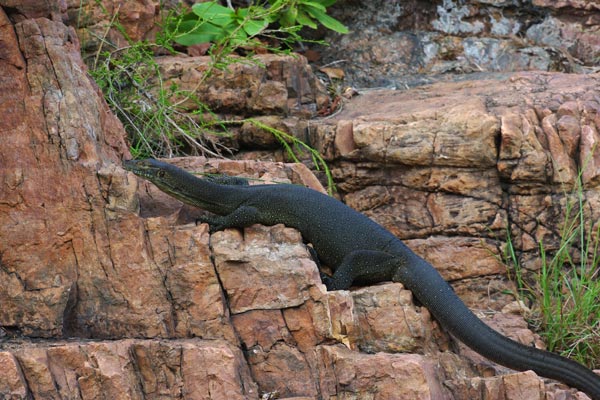 I saw three other Varanus species at Litchfield, but only got a photo of one of them. The two that got away were Varanus gouldii (Sand Monitor), which ran off, and Varanus scalaris (Spotted Tree Monitor), which ran into a small hollow log. The one that did not entirely escape my camera was this rusty-headed fellow, which crossed the road right as we were pulling into a parking lot. I tried to sneak up on it for photos but only managed this one shot before it caught wind of my plot and vanished into the bushes. After much staring at the magnified photo and studying of reference books, I thought that it was Varanus glebopalma (Long-tailed Monitor). But I was wrong; Sam Sweet, who knows far more about monitor lizards than I do, identified it as Varanus tristis (Black-headed Monitor), and explained that the V. tristis in the Kakadu area are typically brown in front, despite their common name. 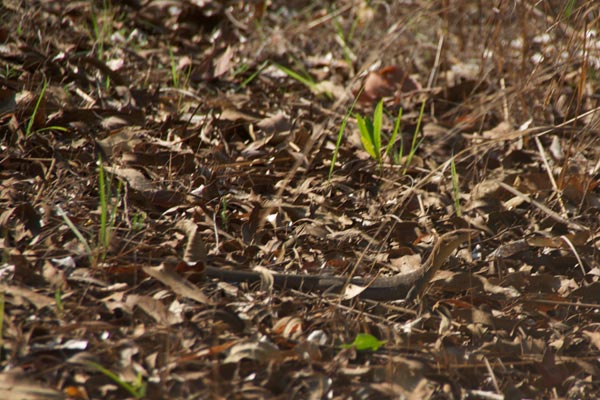 On our last morning in Litchfield, which was also our last morning in a natural area in the Top End, Monica was driving down the main road and I was nodding off in the prized shotgun position, groggy from the previous night of productive road cruising. Suddenly the car swerved towards the center of the road and my eyes snapped open just in time to see us pass a dark, log-like object at the road’s edge. I blurted out “was that a frilly?!”. Monica said “Maybe! I swerved to avoid hitting it, but I couldn’t tell for sure what it was.” I looked back and saw the dark shape move off the road and up a gentle slope. We stopped the car and ran back to search.

After ten minutes or so of wandering the hillside with no luck, we had resigned ourselves to the fact that it was almost certainly a frilled lizard but that we would not be seeing any more of it. But as we headed back down the hill towards the road, my eye was caught by a sapling sporting a lizard-shaped protuberance. There it was! Our very own frilly! You can see that it hadn’t run very far up the slope before climbing up the nearest tree. 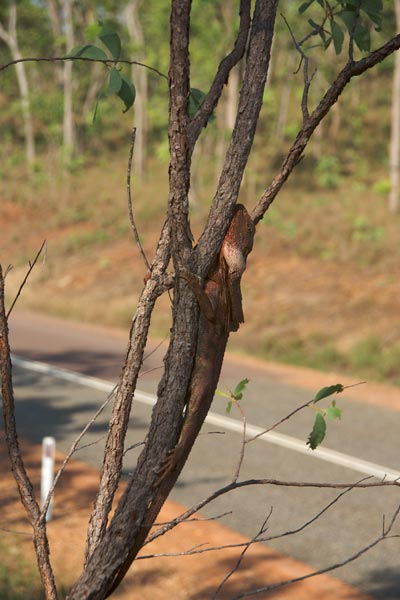 Like many of the other arboreal agamids, Chlamydosaurus kingii prefers to remain on the far side of its chosen tree from any perceived threat. This can make getting a nice profile photo a little tricky, by oneself. But if you send a friend or relative over to the other side of the tree, the lizard will helpfully sidle over to your side. 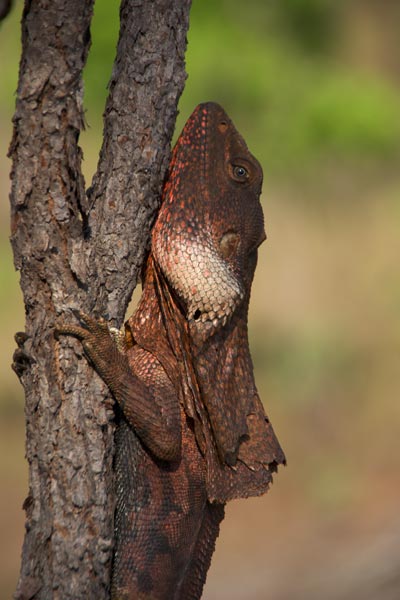 After getting some lizard-using-camouflage photos, I wanted some lizard-bluffing photos. Fortunately our frilly had chosen a particularly short tree, so I gently extracted it and placed it on the ground, where it quickly adopted its most ferocious look. 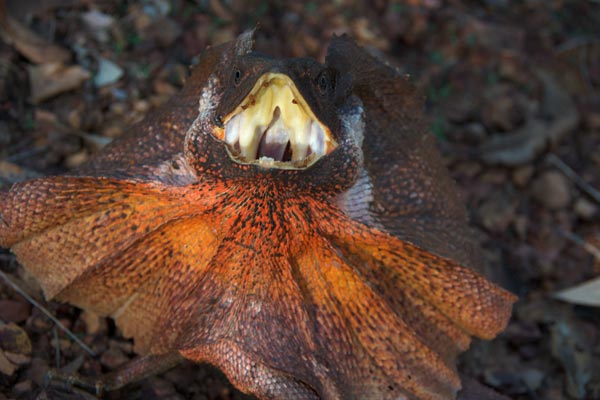 When it eventually realized that we weren’t scared by its bluffing, it changed tactics and decided to run up the nearest tree again. However, in its haste it failed to notice that the nearest tree-like object was not in fact a tree, and chose to run up me. 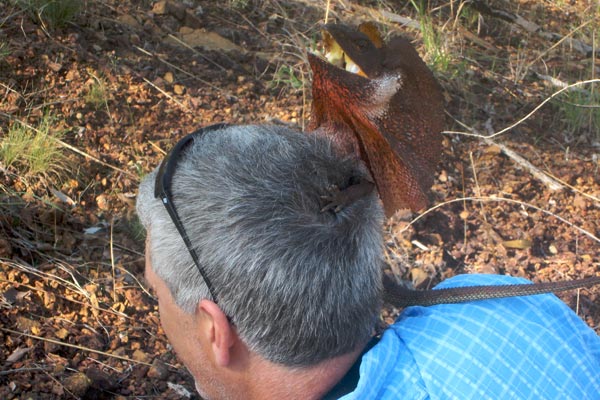 So despite the weather’s lack of cooperation, I accomplished my primary goal of seeing a wild frilled lizard, and just in the nick of time. After Litchfield we visited the Territory Wildlife Park, as previously mentioned, and then headed back to Darwin to prepare for the second half of our trip.